CoStar News 2013 Deals and Dealmakers of the Year Competition

The votes have been received and the winners confirmed in the hotly contested CoStar News 2013 deals and dealmakers of the year competition. In the latest in a series of interviews with the winners, we hand out the award for West End office dealmaker of the year to Simon Korn, of the eponymous Simon Korn Ltd 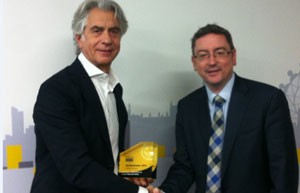 Simon Korn pictured left receiving the award for West End office dealmaker of the year from CoStar News Editor Paul Norman which follows on from the award he received two years earlier for being the second highest acquisition agent in the West End only being beaten into second place by the largest agency in the world, CBRE.

The West End’s office market is home to some of the UK’s most intriguing occupiers and the winner of the dealmaker of the year was involved in realising a particularly interesting move that saw the Gasgosian Gallery relocate to 20 Grosvenor Hill, until recently Savills’ long-term headquarters.

Having trouble keeping up payments of your Office or Retail Rent due to Coronavirus (Covid-19)…Simon Korn can help get your office rent reduced. We have worked through 3 previous recessions and can help get your retail rent reduced to help your Business through Coronavirus. We have helped companies in financial difficulties to reduce their office or retail rent. DO NOT WAIT UNTIL IT’S TOO LATE.
Call now for immediate assistance – 020 7499 6070 or Email Simon Korn at [email protected]